Love What You Do


As I stroll up the ramp by the BlackBerry Lounge bar for the special screening of the Buster Keaton's slapstick silent movie classic, Sherlock Jr. in concert (featuring iNSiDEaMiND performing a new score), something made me stop dead in my tracks.  At first sight, the quirky creatures in the mural caught my eyes.  Then, I slowed down to read this inspiring quote etched into the metal bar above the mural, just visible enough thanks to the illumination.  Next, I felt compelled to take a photograph of this mural with my BlackBerry, and e-mail it with this beautiful quote to share with my beloved husband.


Don't just like.  LIKE is watered-down love.  Like is mediocore.  Like is the wishy-washy emotion of the content.  Athletes don't do it for the like of a sport.  Artists don't suffer for the like of art.  There is no I like N.Y. T-shirt.  And Romeo didn't just like Juliet.  LOVE.  Now that's powerful stuff.  Love changes things.  Upsets things.  Conquers things.  Love is at the root of everything good that has ever happened and will ever happen.  LOVE what you do.

Posted by Shirley Lum at 3:45 AM No comments:

Lantern Festival (or Big New Year) just took place last night, and for most folks it marked the end of the 15 days marathon of feasting. February 17th, 2011 formally ended the Chinese Lunar New Year
celebrations, marking the end of the winter season and the first night of a full moon. This dates from the rule of Emperor Ming (58-75 AD) of the Han Dynasty. If you missed last night's shining moon, try tonight
from your window for an awesome sight. 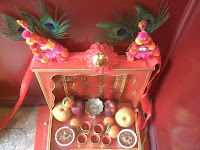 Traditionally, lanterns are lit all over the country in homes and temples to guide all the spirits.   Spectacular processions of exquisite silk and paper lanterns in
every shape and form would take place
in the dark streets. At the end of each
procession a magnificent dragon, carried by at least a dozen men, dance to the
deafening rhythm of cymbals, drums
and firecrackers. All this noise is meant to scare away evil spirits. So what happens when people emigrate to another country, lets say
Canada? Or more specifically, Toronto? 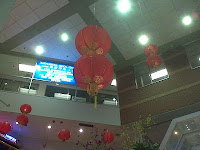 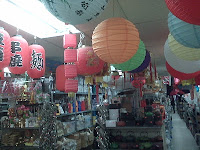 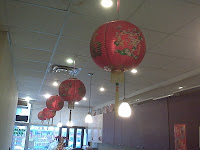 After you finish reading this fabulous article by Elizabeth Baird, register for the Mad for Marmalade, Crazy for Citrus event at Fort York on Saturday February 19th, 2011. Drop into my Marmalade with Asian Twists hands-on workshop.  If you've always wanted to learn how to make a marmalade, here's your chance!  I'll be making two unique marmalades: one with a Chinese twist (Kumquat fruit paired with surprise liquor) and a 10-minute recipe with a Japanese twist (Yuzu fruit).  It's easier than you think and it's the perfect Winter Cabin Fever remedy!


The Year of the Rabbit has always been associated with culture, learning and personal growth - so here's your chance to tune in to this fabulous radio show as I share this colourful festival on air.
As a CBC (Canadian-born Chinese) born and raised in Toronto, I have vivid memories of Chinese Lunar New Years in Toronto from the early 1970s to the present ...  I'll be sharing childhood memories of the thunderous Lions Dances in Old Chinatown's narrow Elizabeth Street behind New City Hall...   I'll be sharing memories of the mesmerizing Lion Dances of Toronto's Second Chinatown along the Spadina Ave./Dundas St. W. axis ...
As a Culinary Historian, I'll share my impressions of the old traditions and hot trends taking place in the BBQ shops, Chinese bakeries and Asian grocery stores ... And you don't have to be Chinese to celebrate the Chinese New Year festivities!

So tune your radio to 99.1FM on Thursday February 3rd between 8:00 - 8:30AM to savour some interesting discussions between Metro Morning host, Matt Galloway and myself about this Chinese festival, to end all festivals. Don't forget to dash off a quick comment about what you loved about the interview!
Posted by Shirley Lum at 3:44 PM No comments:

JOM MAKAN! GOOD FOOD TREK: SPRING IN MY STEP: "Food and festivals are inseparable in Malaysia. Every occasion is a perfect excuse to feast and fete family and friends at the table. ..."
Posted by Shirley Lum at 12:58 PM No comments:

As we exit the Year of the Tiger and enter the Year of the Rabbit, we're witnessing some families clinging tenaciously to traditions, and others wholeheartedly embracing new ones as demographic,  geographic and logistics play pivotal roles.  Traditionally the Chinese Matriarch shopped and prepared for several days, and then actually singlehandedly cooked on their home stoves the 8 to12 lavish symbolic dishes. The whole family would gather together at home for this communal feast to end all feast; rarely would outsiders be invited for this sacred occasion thanks to superstitions, and dining out was never entertained. Once the meal's completed, the mountain of dishes, pots and pans needs to be tackled.  That was the annual tradition for the longest time with my family and many others.  Wednesday February 2nd, 2011 marks the 4th year since I started hosting the annual Chinese Lunar New Year's Eve and New Year's Day multi-course dinner banquets.  In 2008 I hosted an 8-course dinner banquet, and now we're up to two unique 11-course feasts.  Since 1997, when I started conducting my annual behind-the-scenes Chinese New Year tours, I've noticed three interesting trends:


Trend #1: Aging & Young Matriarchs Get to Dine Out!
Unwittingly,  I'm either leading the pack (of half-hearted or whole-hearted folks) or embrace an emerging and interesting trend.  If you look at demographics, we now have an increasing number of aging Chinese Matriarchs, be it in Canada, United States or abroad.  A growing number of adult children are convincing their beloved aging Matriarchs to hand over the task of cooking the numerous symbolic dishes to Chinese restaurants.  This marks the fourth year my mom, the amazing cook that she is, gets to relinquish her role as cook extraordinaire and be able to totally savour the Chinese New Year's Eve celebrations sans exhaustion!  The mountain of dirty dishes to be washed?  That's taken care of, when your family makes that pivotal decision to dine out! Trust me, my sister and I, do NOT miss washing the volume of dirty dishes! Anyway, look around at any packed Chinese restaurant this coming Chinese New Year's Eve on Wednesday February 2nd, 2011 and you'll see many families headed by a very happy Matriarch who is beaming and relaxed... like my lucky mom!  You're probably wondering about the adult children, namely, the grown-up daughters.  Most women  work, whether they're the single gal, single mom, married or married with children. Imagine after a day of hard work, and you still have to trudge up and down the packed aisles in Asian grocery stores to shop for all your ingredients! Then you have to prepare the complicated dishes, and somehow find the time plus energy to virtually cook all day long! There are only 24 hours in any given day! So it's not surprising over the last few years, I've noticed more young families eating out on this special evening and treating mom and grandma.

Trend #2: More Young Chinese On Their Own
At my hosted banquets over the last four years, much to my own surprise I've been getting more young Chinese individuals attending my hosted Chinese New Year's Eve or Day banquets. Turns out, many can't find the money and/or time off from work to fly home for the occasion. In 2011, the festivities kicks off in the middle of the week, making it even more challenging to do so! Because of career choices, often folks have to relocate to a city different from where their families live. So if you don't have any family members in the same city, then celebrating by eating 8 to 12 dishes by yourself is no fun at all! Highlight of the night for me: many of them thanking me for the opportunity to eat the symbolic dishes they crave from childhood and oddly enough, a chance to share their memories of ancient superstitions still playing a role in their own lives with other attendees! To top it off, some attend so they can share their culture with their partner of a different cultural/ethnic background. Talk about embracing each others' cultures, traditions and creating new traditions! Toronto, the Meeting Place it is!

Trend #3: The Family Size & Members are Changing
Over the 18 years of conducting the Chinese New Year tours, I've seen children of interesting cultural backgrounds. The size of the family is now shrinking - I come from a family of four whereas now we're seeing family of two children. I'm now witnessing at my tables families adopting Chinese children, and trying to help their kids embrace the customs and traditions connected with the festivities of Chinese New Year.

I'm looking forward to Chinese New Year's Eve as it kicks-off 15-days of festivities.  I'm excited about sharing the rich customs, traditions and superstitions of Chinese New Year’s Eve, while savouring an authentic communal banquet!  It will be an evening of equal portions of food and facts, as I shed light on old and new customs, plus superstitions throughout the evening. Novice banquet attendees will appreciate the tips I'll be sharing on how to pace themselves to enjoy the banquet to the fullest, and all guests will love the stories behind the auspicious names of the decadent dishes. The Year of the Rabbit has been associated with culture and learning, and we're kicking of the year with plenty of both!

So how are you celebrating Chinese New Year festivities? I look forward to hearing how you celebrate it wherever you are in the world! So feel free to add your comments below and take part in the two polls to the right.