Did you know that March 21st has been declared as International Poetry Day? I found out while I was checking out Twitter and saw a tweet from Shorty Awards! The power of social media!
After mulling it over, I thought it'd be fitting to share this wonderful poem, When I Went Up to Rosedale, written by Canadian poet, Dennis Lee who lives in Toronto.  His outstanding, works include Civil Elegies, Alligator Pie, and The Ice Cream Store. Notable awards would be the Governor General's Award, Order of Canada in 1993. In 2001 Lee became Toronto's first Poet Laureate, serving in that position until 2004.


I love reciting this meditative poem just as we're leaving the tree-lined, old-moneyed Rosedale along my Foodies Gaslight Stroll: Rosedale & Yorkville Village, as we try to ensure that there's equal portion of food and food for thought!  Lets say it's my way of sharing a bit of Canadian culture with all of my guests. They can be passionate foodies from around the world or locals from Toronto; all love this little Canadian literary gem.


When I Went Up to Rosedale
When I went up to Rosedale I thought of kingdom come...
and roads that winds their stately way to dead ends ...
When I came down from Rosedale
I could not school my mind to the manic streets before me nor the courtly ones behind.
- Dennis Beynon Lee, OC, MA

Happy Nowruz or Persian New Year whether you're Persian or not! 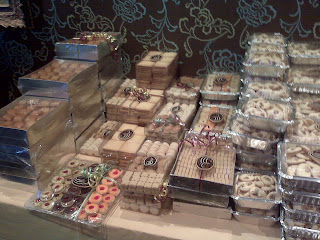 I love Toronto's rich tapestry of diverse cultures as we keep embracing new immigrants who bring with them unique their customs, traditions, and best of all, their delicious food and drinks.  I truly believe Toronto still lives up to its name given by one the First Nations tribes, the Hurons. Toronto refers to the  "Meeting Place" because of the land between present-day the Don River, the Humber River and Lake Ontario. It was about four hundred years ago that the various tribes met to trade. Over the centuries, we've seen influx of immigrants from around the world settle and make this beautiful metropolis their new home.

Born and raised in Toronto in early 1960s, as a CBC (Canadian Born Chinese) I've always savoured embracing another culture's holidays in general, and their foods and customs wholeheartedly! Spring time gives us so much to celebrate - re-birth of the Earth, March Break (do we hear all the kids cheering in the background?), St Patrick's Day, Persian New Year and more to come! 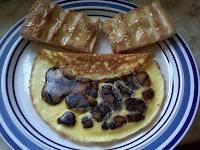 How many of us ended up as honourary Irish, cooking something "green", and maybe dropping by Irish pubs in Toronto? Mind you, I did kiss the famous Blarney Stone while cycling solo in Southern Ireland in 1988, so that very act makes me more Irish than your average folk! I feel very Irish, as I led my Kensington Foodies Roots Walk wearing a green sweater.  I even had guests sampling the beautiful and delicious Guinness Cheddar Cheese instead of the usual Maple Cheddar Cheese, all in the name of Saint Patrick! As a matter of fact, on St Patrick's Day I treated myself to homemade omelet with the remaining Guinness Cheddar and Persian Flatbread dribbled with Summer Blossom honey from Ontario! A beautiful way to meld several cultures.

On Sunday, exactly a week prior to Persian New Year I went up to Yonge/Finch area with hubby to soak up a bit of the excitement in preparing for the festivities. I was exhausted after my tour, but nevertheless, I instantly perked up upon arriving at one of my favourite Persian grocery stores. Hubby's always amazed how I go instantaneously from tuckered to alive like a firecracker, or Energizer Bunny Rabbit! 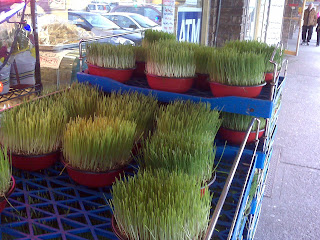 Outside of the store, we're greeted with the first New Year items for decoration: Sabzeh - wheat, barley or lentil sprouts growing in tray (transfer to dish when you get home) which symbolizes Re-Birth. If you carefully, you can see that inside, right by the window, they had an array of white, pink and purple Hyacinth plants. 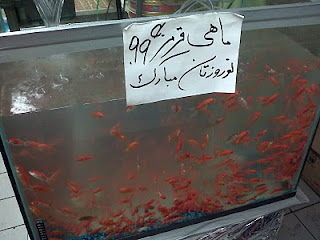 Next item is the fish tank specially brought in for this holiday, as they sell a lot of gold fish and fish bowls! As I watch the elderly gentleman (hired just for this week) carefully scoop out required fish into the clear plastic bags, I couldn't help but think of a Jerry Seinfeld episode where Elaine and friends can't find their car in the mall after Elaine bought gold fish in a bag! I'm sure no one had problems finding their car, as this is a tiny strip mall within the Persian/Korean neighbourhood!

The special Nowruz cookies and other treats are in!

I felt like Noah as I ordered the cookies and kept saying "Two" and pointing at everything on the cookies table. Yes, hubby and I went to the gym several times this week to make up for "tasting" each type of treats I ordered. Sigh! 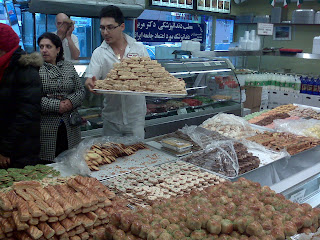 So if you're invited to a Persian New Year's eve party tonight or New Year's Day party tomorrow, you now have an excellent excuse to pop into any Persian shop today (be forewarned: it will be like a mad house like Chinese New Year's eve in any Chinatowns in Toronto) and pick up as a "hostess gift" a plant (Hyacinths or Tulips)  and or a box of pastries. 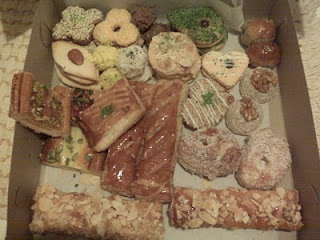 Happy Nowruz where ever you are and whether you're Persian or not! On that note, this little CBC is going to try another Persian New Year cookie from this box we picked up and then go visit my Persian family members! Happy Nowruz or Persian New Year!  So how are you celebrating and participating in  in the New Year festivities?
Posted by Shirley Lum at 4:06 PM No comments: