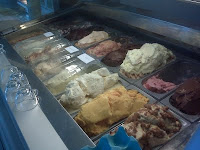 The Ice Cream Store
Oh, the kids around the block are like an
Ice Cream store,
'Cause there's chocolate, and vanilla,
And there's maple and there's more.
And there's butterscotch and orange -
Yes,  there's flavours by the score;
And the kids around the block are like an
Ice cream store!
- Dennis Lee, Toronto's first Poet Laureate
This poetic gem by Toronto's first Poet Laureate, Dennis Lee always make me nostalgic... Why you might ask? Every July, from 1993 -2001, I  kicked-off my annual Cool Sundae Bike Tour  by reciting this delicious Dennis Lee poem.  This ride was one of my many favourite annual neighbourhood bicycle tours I designed and personally led through quiet side streets during the hot blistering summers in Toronto.  The month of July always seem to get hot and dry. The intense heat always have us screaming for cool treats like ice cream, gelato, tartufo, granita along a two-wheeled adventure in Toronto's various neighbourhoods!

We started at Castle Frank Subway Station and pedalled up to the Corso Italia neighbourhood along St. Clair Avenue West.  Nestled in the St. Clair Ave W/Vaughan Road/Bathurst Street triangle was  Dutch Dreams,  where we savoured fabulous ice cream in a building looking like a red Dutch windmill!

After that cool stop, we continued towards the old Neilson Factory that's now a chocolate factory on Gladstone/Dundas Street West.  This old factory started off cranking out local ice cream thanks to Neilson's eldest son, a wrestling champion who claimed that his fitness level was achieved thanks to cranking the ice cream on a daily basis! I say he takes the title as Hand-made Ice Cream champion in Toronto! Thus the humble beginning of locally made ice cream in Toronto.

After food for thoughts (or ice cream for thoughts), we cruised over to Little Italy neighbourhood for another nooks and crannies special - Sicilian Ice Cream Company to sample a medley of homemade Tartufo, Gelato and Granita. Bellisimo! Thank you Galipo brothers for bringing their traditional Capo D'Orlando, Sicily gelato recipes over with them as they emigrated to Toronto in 1959! Once in a while, you still see me popping in for a box of frozen Tartufo to take home to savour!

Remember Yokahama Noodle at 326 Adelaide Street West? It's long-gone from that best-kept Japanese foodies spot, but the memories linger for their home-made Japanese Green Tea Ice Cream... it was a rich and smooth ice cream thanks to the 35% cream and finely grind Macha Green Tea ...  Sigh.... Yes, after a light lunch we had room for a tiny sampling there. When this little pokey Japanese eatery closed shop, we reluctantly replaced with a stop  for Durian Ice Cream in one of the Vietnamese stores in Toronto's Second Chinatown (Spadina Avenue/Dundas Street West area).

Somehow, we slowly pedalled our way through the winding tree-lined streets of the historic Annex neighbourhood, and ended up in old-moneyed Rosedale's best-kept secret, My Favorite, run by Indira and her daughters.  We simply had to pay homage to another local pioneer, Greg Mahon, the ebullient founder of Greg's Ice Cream, who starting using local, natural and premium ingredients since 1981! My Favorite (yes correct spelling at the store) were the first to serve his ice cream flavours like Green Tea, Roasted Marshmellow and Coffee Toffee (my three all-time favourites) outside of his original shop on Bloor Street West (across from the ROM).

Ah the good old days! Some of these spots are still around, and sadly, some departed, and new nooks and crannies have popped up. Stay tuned to the new ones I'll be featuring in my next blog. Meanwhile, what's your favourite Toronto haunt? Feel free to share your memories of past ice cream parlours  by posting in the Comment section,  and don't forget to put your favourite neighourhood cool spot on the 2011 Toronto Ice Cream map by checking out the poll on the right hand side of this blog!  Stay cool!  Stay tuned for my next blog, the new cool neighbourhood nooks & crannies!
Posted by Shirley Lum at 6:48 PM 3 comments:

New Gelato Company Offers On-Site Service, Logo-Shaped Popsicles | BizBash
If you're renting one of the hot Bixi bikes, and happen to be pedalling along the waterfront's west end, it'll be cool to head north along Strachan Avenue and then go west along Queen Street West (aka the hip Design & Art District) and drop by Boreal Gelato Company at 1312 Queen Street West in Parkdale neighbourhood of Toronto. See you there, as I'll be checking out this new gelato site at least once this hot summer as part of my R & D ;-) #TorontoTrending
Posted by Shirley Lum at 10:10 PM No comments:

From time to time, I get asked where do I go if I'm planning a Staycation in my own home town called Toronto? I enjoy mixing free events with moderately priced events ... I compiled a brief list of some of the best-kept secrets in town! Enjoy! Make a day of it or an evening of  it!  Hope I'll see you at one or two of the events! 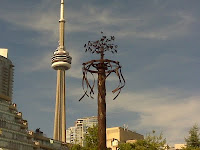 Thank you Yo-Yo Ma for proposing to the City of Toronto to have this beautiful Garden of Eden with live music by Lake Ontario! Locals and travellers (in the know) can enjoy the cool lake breeze under the giant weeping willow tree while attending the FREE concerts on Thursdays at 7:00 PM and on Sundays at 4:00 PM! Whenever I get tired of the hustle and bustle of downtown city life,  this little gem will restores my soul! You'll find me packing a picnic basket with my favourite dishes I've made ahead of time or items I might pick up from favourite Kensington Market shops or Chinatown eateries.  Don't forget to bring along sunblock, a sun hat and a blanket to sit on. Check their amazing schedule of concerts http://www.harbourfrontcentre.com/torontomusicgarden/index.cfm  and mark your calendar or whatever phone device you own! NB: Try to get there one hour prior in order to grab the best spot for your picnic and concert seats!

Most locals associate Edwards Garden with weddings and photography in the summer. Some might think of it as only an area to coast through on bike or roller blades. Well, there are two wonderful programs I'm thinking of checking out myself. They have the Farmers' Marketplace 3:00-7:00 PM. As a matter of fact, i'm thinking of shopping for part of our "picnic" and/or grocery and make it a night out.  Go early to enjoy the market, then a light dinner or refreshment at the Garden Cafe,  and then attend the 7:00-8:30PM concerts. Check the schedule http://torontobotanicalgarden.ca/events/gardensofsong.htm and mark the dates in your calendars! You might see me there with my antique picnic basket!
Toronto Botanical Garden, 777 Lawrence Avenue East, Toronto 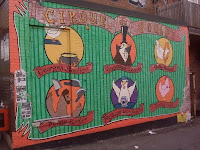 I've had locals mention that they love taking off on Fridays during the summer to relax, catch-up on errands, and to re-charge themselves. So we're offering these same folks the opportunity to re-discover Toronto's nooks and crannies while treating themselves as they shop along one of these foodies walks! Yes, that's how yours truly, the culinary historian/tour guide finds time to shop for her groceries by shopping along the tours as well! http://TorontoWalksBikes.com
* Kensington Foodies Roots Walk: Multi-ethnic Summer Bounty 9:30 AM-1:00 PM
Fri. July 8th, 22nd, Aug. 5th, 19th,
* Second Chinatown Foodies Walk 10:00 AM-1:30 PM
Fri. July 15th (8 spots),  29th, Aug. 12th, 26th, Harvest Moon Prep & Sept. 2nd

Mark this in your calendar -  Last Friday 1:00 PM of every month! The Design Exchange or DX was formerly the Toronto Stock Exchange, a beautiful Art Deco building. Join the DX for the free tours of their current exhibits  and space on the last Friday of every month! RSVP with noa@dx.org or call (416) 216-2120. Can't make it? Contact Noa at noa@dx.org to arrange a group tour!
Latest exhibit Play>Nation opens July 7th, 2011 and is an indulgence in Canadian 'play' influenced by our vast geography. It showcases some of our iconic necessities, such as canoes, snowshoes and bicycles.  Hours: M-F 10:00 AM-5:00 PM Sat/Sun Noon-5:00 PM
DX 234 Bay Street, Toronto (416) 363-6121


Remember, summer will speed by quickly, so enjoy and savour every moment of this fabulous season while you can! It's double the fun when you share your "goof-off" time with a close friend or relative!


If I missed any Toronto staycation ideas, please feel free to share them here as Toronto is fast becoming a "happening" city!

Foodies mark Thursday August 18th in your calendars so you don't miss this historic culinary event! See you at the Sherway Garden Shopping Mall in line to get into this flagship store!
Posted by Shirley Lum at 11:37 AM No comments: