Once we've rested and stuffed ourselves during the Canadian Thanksgiving long weekend, we then have another annual tradition at A Taste of the World's office.


The phone starts to ring off the hook (or out of the cell phone holster). The e-mail enquiries start coming in... All the phone calls and e-mails have the same quest: the hunt for the limited Advance E-Tickets for Halloween Week ghost walks. At first, folks will be relaxed but as Halloween night approaches, the sense of urgency picks up...


To ensure the quality of each ghost walk during this extremely popular time of the year, we sell Advance E-Tickets with advance payment.


Nightly, starting from Tuesday October 25th until Tuesday November 1st, 13 lucky guests get the opportunity to explore the eerier side of Toronto with A Taste of the World. Space availability will be updated on a regular basis, so check-in as frequently as you like...

Book NOW to avoid being disappointed at info@torontowalksbikes.com or (416) 923-6813

Is Toronto, the Meeting Place for the Living... or the Dead?
Find out on a ghost walk with us during Halloween Week 2011!

Posted by Shirley Lum at 4:19 PM No comments:

There is something magical about exploring a big city once dusk gives way to the darkness of night...
Nuit Blanche enriches any city hosting such an all-night art event as participants, be they long-time residents, newcomers or visitors, they savour an evening of full sensory experience ....
Whether you call Toronto your home town, or you're visiting Toronto a gazillion times, mark your calendar now for the 7th Scotiabank Nuit Blanche: Saturday September 29th, 2012!
See you on the streets of Toronto for another awesome cultural experience! 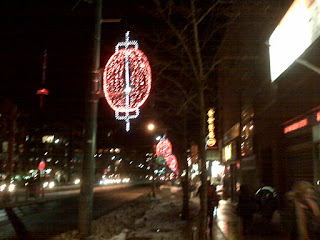 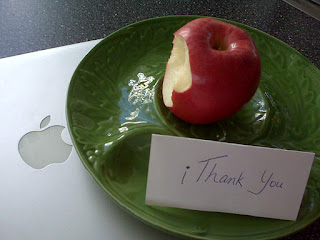 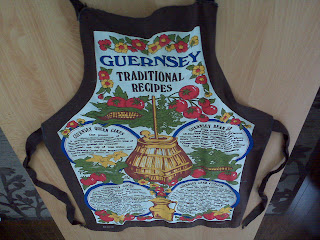 Ever been to Guernsey Island? It is one of  four beautiful islands that make up the Channel Islands between England and France. I've been there.  Solo.  I pedalled Guernsey and Jersey Islands as part of my  2-1/2 months 2-wheeled adventure of Europe of my own design in 1988.  I vowed I'd return to the Channel Islands some day, with or without my bicycle ...

Over the years, I've been transported back to Guernsey Island...three times! 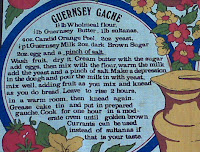 The first time would be thanks to my Guernsey Traditional Recipe apron....  An apron with local recipes printed on it, makes a compact, light-weight and practical souvenir for a biking foodies. Yes, this vintage 100% cotton apron (made in UK) is in mint condition because I thought it was too "pretty" to be used! Oddly enough, I never had any of these delicious traditional Guernsey dishes while I was there:  Guernsey Queen Cakes that calls for equal shots of rose water and Brandy;  Guernsey Bean Jar that calls for pigs trotter (or beef shin bone!); and mouthwatering Guernsey Crab Cutlets. My favourite of them all, decadent Guernsey Gâche. This recipe caught my eyes thanks to two ingredients that are truly local ingredients: Guernsey Butter and Guernsey Milk! What's the big deal? Try Afternoon Tea while you're on Guernsey Island and like me, you'll notice right away how more golden both the butter and the cream look, and how much richer is the taste. A taste of heaven on paradise island! Now, imagine cheese made from Guernsey cow milk. If you're in Toronto, try to fit into your itinerary my Kensington Foodies Roots Walks. On this tour, you'll get a chance to try an artisanal Ontario cheese called Niagara Gold Cheese, made by Upper Canada Cheese Company. By the way, they own a few Guernsey cows. Need I say more?

The second time I'm transported back to Guernsey is thanks to Victor Hugo who was exiled there from 1855 to 1870....  Those of you who have been guests on my Ghosts, Greasepaint & Gallows walks, might  hear the eerie tales of my "accidental" visit to the French writer's home, the famous Hauteville House, located on Saint Peter Port heights... and my coincidental stay at the same guest house he stayed at while waiting for his home to be built... the eerie details are better told in person while on the ghost walk.... 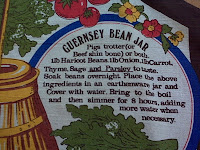 The third time I'm transported back to Guernsey is thanks to a brilliant bestseller....  I'm currently savouring a new novel -  Guernsey Literary and Potato Peel Pie Society by Mary Ann Shaffer, who passed away in 2008, and her niece, Annie Barrows. It's a little literary gem set in Guernsey about love, war, and the utter delights found in good books and good company.  I love the connections between a roast pig dinner and a potato peel pie and the beginning of a book club with an unique foodie name. How did the book club come to have such an interesting name? Read and find out!  Meanwhile, if you are dying to make your own modern Guernsey Potato Peel Pie check out this YouTube video demonstration courtesy of VisitGuernsey ... Bon Appetite!


By the way, did I mention that Guernsey Island also have some beautiful beaches?  Perfect setting for a sunset stroll after a tasty dinner of modern Guernsey Potato Peel Pie ...

You just might find me re-visiting Guernsey Island ... exploring its many nooks and crannies in the near future...  enroute to Paris for my wedding anniversary with my hubby...
Posted by Shirley Lum at 1:16 AM No comments: