I just love the month of April!
*  The month of April has been declared as National Poetry Month! Sharpen those quills folks and put on your Maple Leaf toques! Folks attending the popular Kensington Foodie Roots walks throughout 2011, will have "food for the soul" experiences, as I introduce one of my Grilled Cheese Haiku each time. It will be fun paying tribute to Canadian fromage with the seasonal/festive cheese tastings!
* April showers bring May flowers for those who appreciate Mother Nature's spring blooms! After a bit of hard work in my garden, I'm ready for a Grilled Cheese Sandwich!
* The month of April has also been declared as Grilled Cheese Month!


I can't help myself, but this blog will be peppered with my own Haiku creations inspired by some of the different grilled cheese sandwich combinations I've made over this month ...  and sprinkled with a bit of of trivia ...


What's amazes me, is how the combination of these three basic ingredients generated "cheesey tweets" in Twitter.   Joining the conversation in Twitter, and I found "chat rooms" in the guise of Hashtags like #GrilledCheese,  #CH (FYI: Cheese Haiku) and #Cheese!  Marcella Wright aka Twitter@cheesemonger in Twitter, has postings every day of the month, and this one caught my eyes/palate:  "April is Grilled Cheese Month" #21 Woman of LaMancha & Flame-Crafted Ham: http://wp.me/pvQzS-92 Bravo, Marcella!


Heading south of the border, the  8th Annual National Grilled Cheese Invitational http://grilledcheeseinvitational.com took on April 23rd, 2011 in Los Angeles, CA! Aside four different categories of grilled cheese sandwich, they also had Haiku and limerick poetry contests! The last time I wrote a Haiku was too long ago back in grade school. Anyway,  I was unable to attend this cool event,  but perhaps next time and I'll be armed with a variety of Haiku, bread, butter and cheese.  Meanwhile, here's a wonderful report in LA Times "Grilled cheese as far as the eye could see" to whet your appetite and entice you to enter their 2012 cooking and/or literary contests:   http://lat.ms/gc5rHj
Thanks to my love for this fabulous sandwich, poems written up by fellow Twitter fans for Haiku and limerick poetry contests  inspired me to haul out my old fountain pen and ink well, to scratch off a few "cheesey" Haiku of my own while exploring new cheese or bread to use as I make my grilled cheese sandwich. 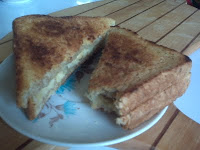 
From early childhood and right through my university years, the grilled cheese sandwich was  an old reliable friend whenever I'm in the pinch for time.  In the past, my grilled cheese sandwich would have been a slice of processed cheese slipped between white bread by Wonder Bread. Then, I switched to whole wheat bread from a national grocery store. Since starting my Kensington Foodie Roots walking tours, my bread slowly morphed as I started shopping in the culturally diverse Kensington Market's bakeries and grocery stores. A new repertoire of heavenly slices for my grilled cheese sandwich: Rye bread, Jamaican corn bread, Portuguese white corn bread, Persian Sesame Flatbread, and the list goes on. 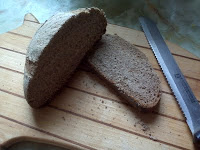 Early April, I found myself with a grilled cheese sandwich consisting of decadent Guernsey Girl Cheese by Upper Canada Cheese between hearty slices of Red Fife Bread from Woodlot Restaurant and Bakery  accompanied by  soup and salad. As I nibbled into my sandwich, I read What's to Eat? Entrees in Canadian Food History. The chapter, Grain Elevated: The Fall and Rise of Red Fife Wheat by food columnist Sarah Musgrave caught my attention. In Grade 8, I wrote a report on the status of wheat in Canada, and I vaguely recalled coming across something called Red Fife Wheat. 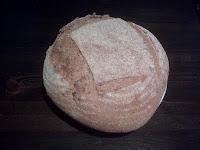 In this chapter, she discussed a heritage grain that is currently regaining favour after a period of neglect. She beautifully traces the story of Red Fife wheat by ways of exploring issues of provenance. She asserts the value of heritage foodways and introduced me to a special Canadian who actively engaged in challenging assumptions about the innate benefits of novelty and progress,  The sandwich almost wouldn't have been possible, if not. for the perseverance of agronomist Sharon Rempel, under her guidance, seed specimens were transferred to a seed orphanage operated by he Canadian Heritage Wheat Project.  Red Fife would lie dormant until mid-1980s, when a bag of pure Red Fife seed, some of the last remaining stock, was discovered in a shed on a lonely stretch of prairie  road.

Starting with half pound of seed, Rempel began bulking up on Red Fife and eventually had enough to begin distributing it to farmers by the late 1990s. Since then, it has cropped up from one coast to the other coast of Canada, in Antigonish, Nova Scotia, as well as Hastings, Ontario, and Cranbrook, British Columbia, with the tonnage harvested each year continuing to grow. Like many old wheats, its genetic variability makes it adaptable to different growing conditions and suitable for organic cultivation.


The next exciting chapter in the Red Fife story unfolded on a rainy night in November 2004, when the grain finally made the leap from cultivator to consumer as the Loiselle family farm in Vonda, Saskatchewan delivered to Wild Fire Bread and Pastry, a tiny bakery in Victoria, British Columbia.


Fast forward to late 2010 as David Haman, chef/owner opened Woodlot Restaurant & Bakery in downtown Toronto. My husband and I, love picking up this hearty bread as a treat once in a while, to make some of the most fabulous grilled cheese sandwiches.